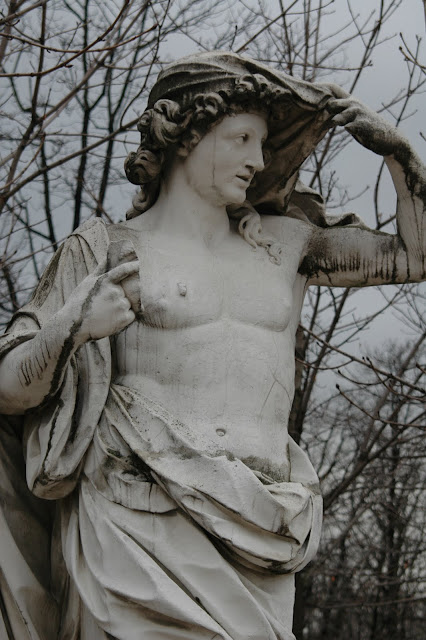 This photo was taken on a gray December day in Jardin des Tuileries near l'Orangerie, and there was no need to present it in black and white as the weather had reduced the landscape to monochrome tones. This white marble statue is one of over a hundred found in this park, bordered on one end by Place de la Concorde and on the other end by Jardin du Carrousel and the Louvre. Peter of Peter's Paris had a post on the statues of Tuileries and noted that most of the marble ones were from the 19th Century. The marble statues in his posting appear to have been cleaned since my photo was taken.

For those of you who saw my post "Un, deux, trois" a few days ago (Nov 18), Laurent of Daily Photo in Paris has an almost identical perspective only taken at night... have a look here!
Posted by Genie -- Paris and Beyond at 2:01 AM

It DOES look like she's covering herself to protect herself from the rain. She'd have to do that here too today.

A soulful sort of picture, especially in black and white.

I agree - it does look like the statue is trying to take cover from the rain. I didn't remember that one - just the lions. Counting down the days.....

How did you guess the rain was back again today ?
By the way, yes of course I would also love to meet you when you're in Paris. Email me at : dailyphotoparis@gmail.com when you're available.

Gray days can make for beautiful photos as you have so wonderfully demonstrated with this photo.

One of my lasting memories was from the Metro ride where the voice called out Tuileries. Then we'd get off the Metro and wander the gardens.

Yes, it's gray but what a stunning backdrop the bare branches make for this statue. Winter in Paris is monochromatic but lovely all the same.

Terrific capture as always! And, yes, winter in Paris may be B&W but it is always beautiful. Great statue and she does look as if she's try to take cover from the rain!! Hope you have a great week, Genie! Enjoy!

I also think that this statue seems to try to avoid rain..:)
Thank you to have joined my followers! and Welcome!

Jardin des Tuileries is one of my favorite places in Paris!

It's nice how they take care of the statues in Paris. Other cities should take note.

What a beautiful statue. We only got to see the edge of the Tuileries, by the Louvre. Four days in Paris is not enough to see everything.

We've got the clod, clammy, drizzling too.

The blurry twigs in the background really set off the desolation of the statue. Well done!

How beautiful...both the photograph and its subject.

Hi Genie- rainy days are sometimes the best for this type of photo- I like it!
Imagine cleaning all those statues!!
xx
Dianne

Bibi -- And we were running from the rain here today also! B/W au naturel... like that description.

Holly -- It was both cold and rainy but made for great photos... no such thing as a bad day in Paris!

Laurent -- Lucky guess (and I checked weather.com) I'll send you an email.

Rob -- What a great memory and the gardens are a superbe place for wandering...

Virginia -- I'll be taking a small p&s (actually an underwater camera) so if it pours I'll be ready just the same!

Sylvia -- Merci for your comments. I only hope that I will be lucky to see the rare snow in Paris.... Did I just say that?!

Malyss -- I think that she is covering from the rain. Je t'en pris.

Sara Louise -- It is hard to choose because I have three that "speak to me" but Tuleries is in that group.

Starman -- I think that the marble ones cannot be neglected for long (100 years?) It was encouraging to see much cleaner statues in Peter's photos.

Loree -- I agree and think that four years would not be enough. I think about places I have visited for 4, 5, or 6 days as a tourist checking off the sights one-by-one, knowing that I really did not give that city a chance.

Birdman -- I think that we need to hear from our friends "down under"... surely they have some better warmer weather!

Paul -- With the staining on her arms, it made me think "acid rain" -- It does seem desolate.

Indie-Tea -- Merci beaucoup... It's nice to see you here again and I'll hop over for a visit with you, too.

Dianne -- The cleaning is probably not performed by the green-suits but someone skilled in artifacts or marble. Hummmm... I wonder...

THANKS FOR ALL THE COMMENTS! I HAVE BEEN DRIVING ALL DAY... FINALLY BACK HOME!