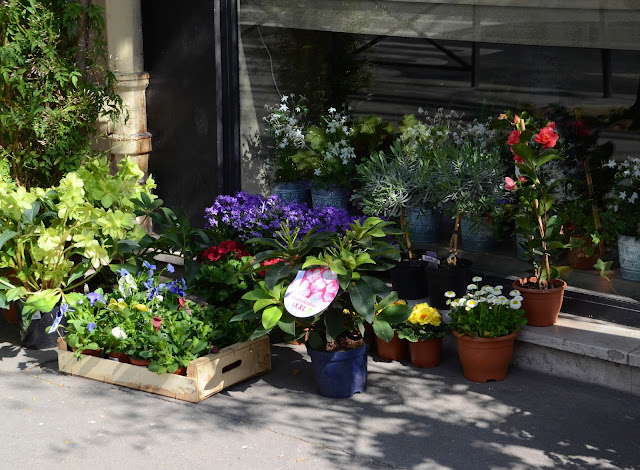 From the elegant flower boutiques to the simple corner fleuristes,
nothing says Paris in the spring like flowers.

Even a casual placement of flowers on the sidewalk has
a recognizable flair.  In trips to Paris I have given flowers
and have been gifted with bouquets.

There is nothing better...
and there are no calories in this feast! 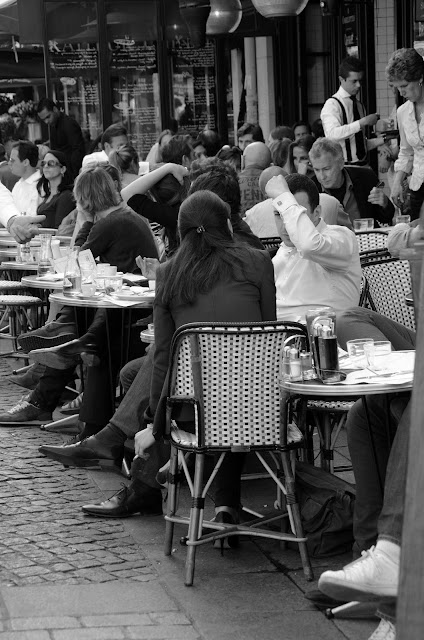 A café on Rue Cler

This delightful café on Rue Cler is a scene repeated all over Paris.
I love to people-watch and wonder about their "stories."

Perhaps the shoes will give us some clues... 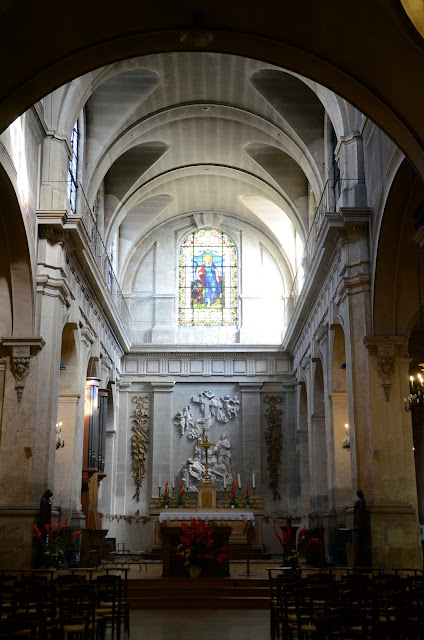 The layout of the sanctuary is that of the cross in the classic style of the Seventeenth Century.  This church is best known for its cemetery which was closed in 1804.  During the French Revolution, the bodies od three hundree people guillotined in the Place de la Bastille and the Place de la Nation were buried here.

The more I read and research,
the more intrigued I am by the history of this city, Paris. 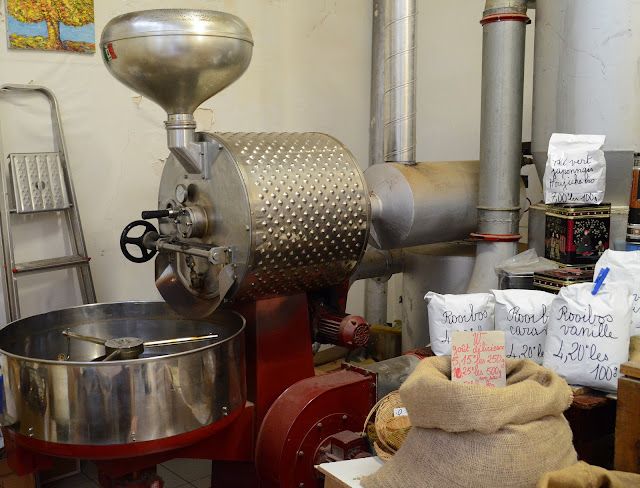 On Cour Damoye is a delightful shop for an afternoon tea or coffee,
patiently brewed by the owner of La Brûlerie Daval.

Take a stroll down this quiet impasse,
free of cars and reminiscent of years gone by.

Stop off for an expresse or a cup of tea.
The memories will linger... 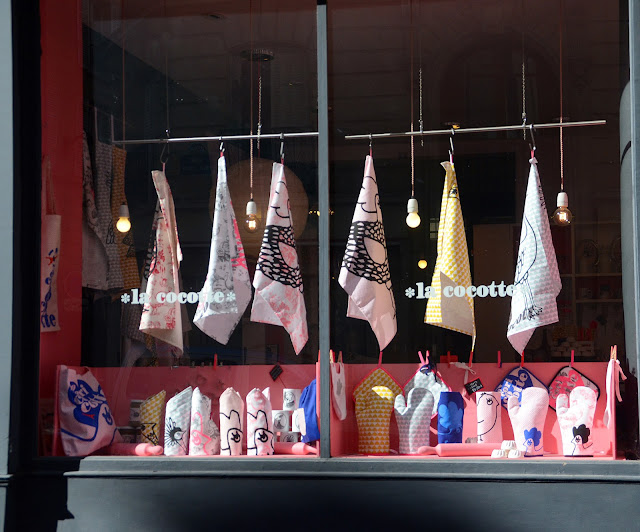 How appropriate that a street of restaurants and bistrots
would also display a boutique of "objets gourmands."


In looking for the translation of "la cocotte" I found:
darling, honey, love


Based on the website for *la cocotte* the word "hen" seems appropriate. 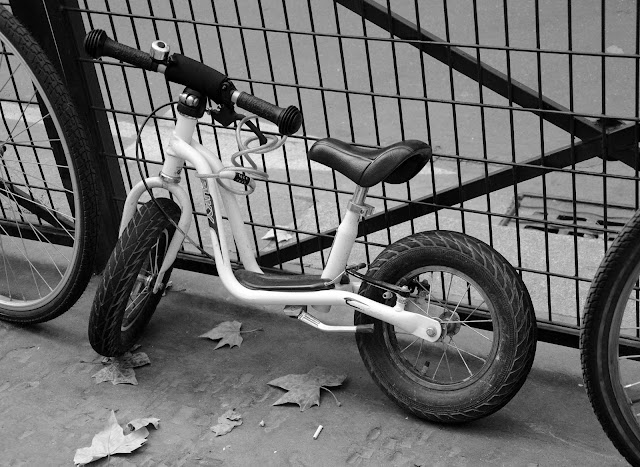 Complete with kickstand, hand brakes, and sturdy lock,
this little bicycle holds its own amid the full-size bikes.

Oh, and do not forget the necessary bell. 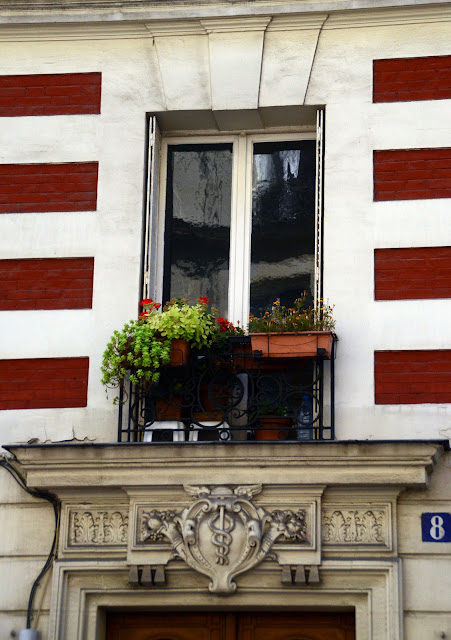 This Haussmann era building at the corner of Rue Paul Bert and Rue Cesselin
has four floors above the street level with wrought iron grills
and pleasing patterns of red (painted) brick and white stone.

In the warm months of the year
almost every window is adorned with plants and flowers.
I would add herbs to that list. 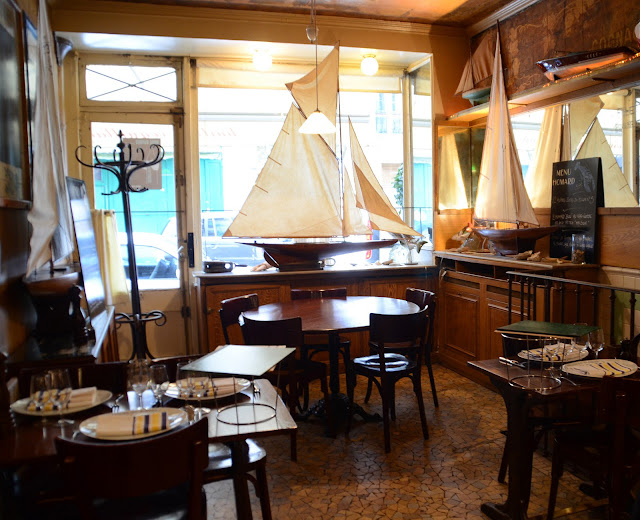 Situated next door to Bistrot Paul Bert, this restaurant of huîtres (oysters), gambas (prawns), crevette (shrimp), homard (lobster), and many types of fish won my heart.  It is decorated with large wooden boats, maps and painted murals of shellfish.  The blackboard menus feature the daily catch and have a large selection of named oysters.

I learned from my experiences at Le Baron Rouge that you order oysters by the number which indicates the size of the oyster and by the beach, such as Omaha Beach.  There are too many choices so you order some of all of them and savor the individuality of each.  Just as the French cherish their baguettes, the oysters are serious business and not to be rushed.  They have a nice selection of wines, and a glass of Sancerre is a perfect accompaniment.

Living most of the year on the Gulf Coast of the US and traveling to other coastal oyster regions (Seattle, Vancouver), my tastes are discerning.  The oysters that I enjoyed at L'Ecailler du Bistrot were perhaps the best ever tasted.  One could close the eyes and be transported to Brittany. 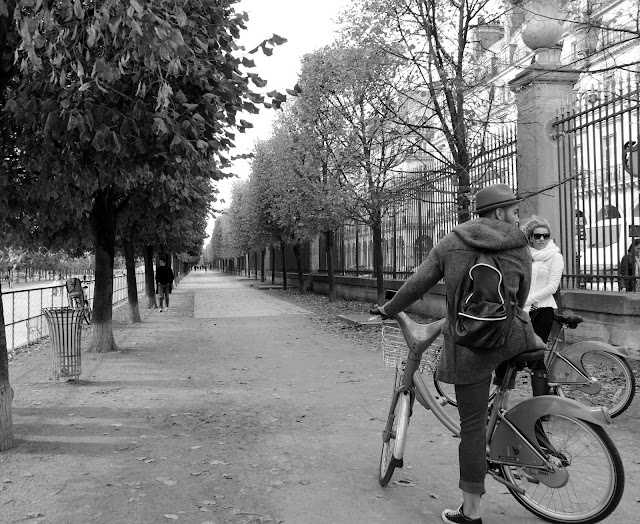 This sumptuous park is the largest in Paris at 63 acres (25.5 hectares)
and provides a grand outdoor entertainment center for Parisians and visitors alike.

Jogging, walking, riding Vélibs, playing pétanque,
sitting in the ubiquitous green chairs by the side of Grand Bassin Octagonal...
The list is endless 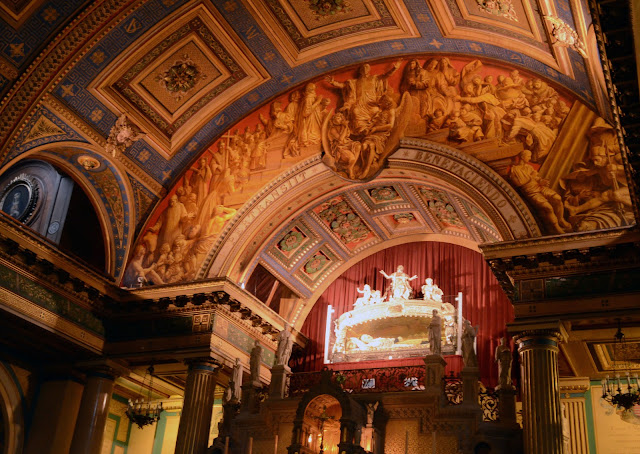 He worked for some time in Paris among imprisoned galley-slaves, and established a group known as the Vincentians, priests with vows of poverty, chastity, obedience.  The Vincentians (also known as Lazarists) are today present in over 80 countries.

After his death in 1660, he was canonized by Pope Clement XII in 1737.  In the photo above you can see the richly appointed shrine which contains the body of Saint Vincent de Paul.  The bones are his, and the "body" was created beautifully of wax over the skeleton.  The overall effect is of the gentle saint peacefully at rest.  I did not photograph the body, but photos are available on the internet if you are interested. 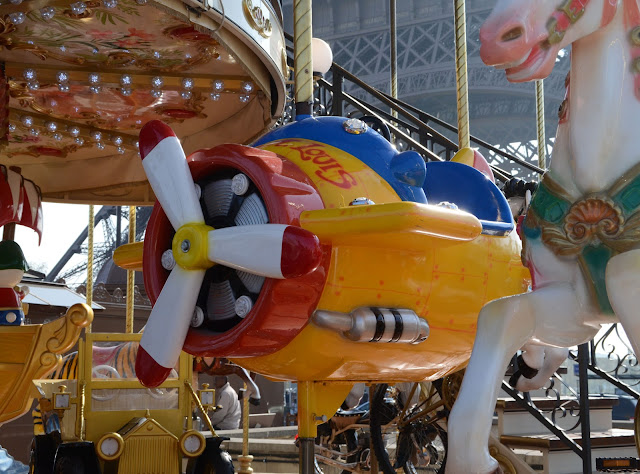 
What a lovely background as we spin around. 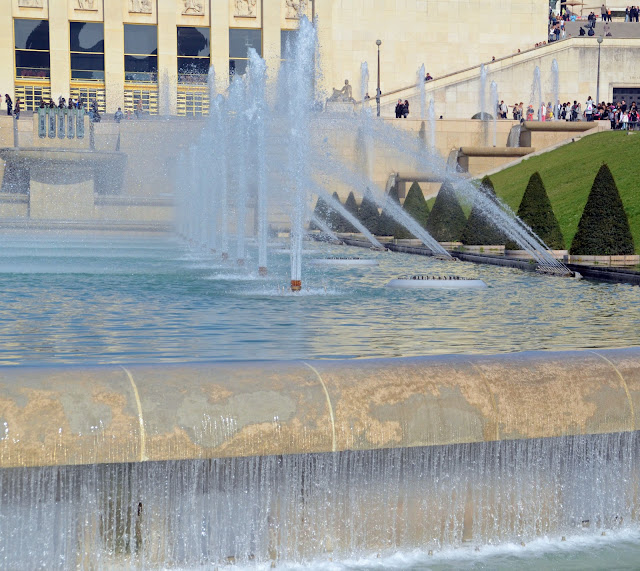 Les Fontaines
The Fountain of Warsaw

Between the Palais de Chaillot at Trocadero and the Seine is a garden designed by Jean-Charles Alphand for the Exposition Universelle (1878).  This array of magnificent fountains was created by Roger-Henri Expert for the Exposition Internationale des Arts et Techniques dans la Vie Moderne in 1937.

If you come in the evening to see the sparkling Eiffel tower,
you can enjoy the lighted display of these cascading fountains. 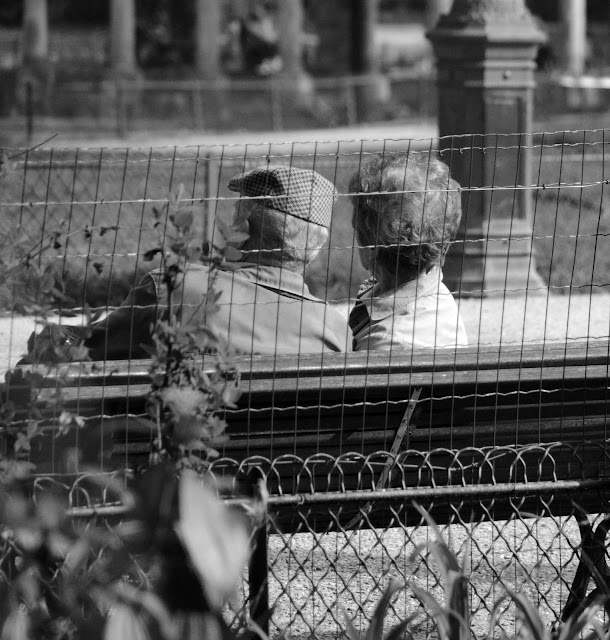 Parc de Monceau is not just for the young,
but for those whose love has matured.

Ahhhh, printemps...
love is in the air Parc de Monceau was designed by Carrogis Carmontelle in the late 1700s
with a fanciful assortment of features:
a Roman colonnade, antique statues, a tatar tent,
a farmhouse, an enchanted grotto, an Egyptian pyramid, and more

It is one of my favorite parks in Paris, active with Parisians and their children.
The change of seasons is particularly remarkable in the spring. 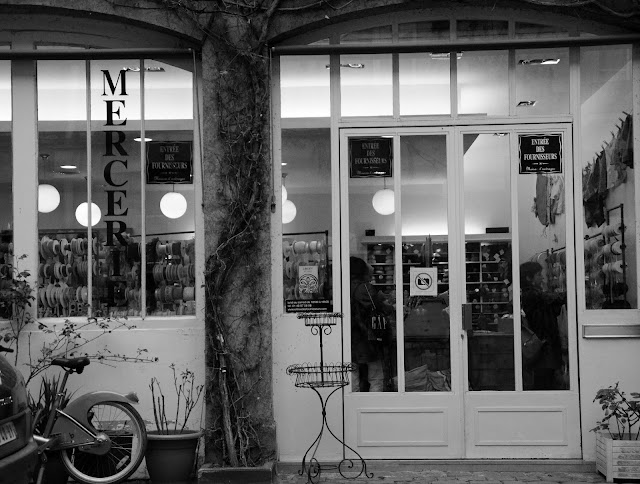 Tucked quietly off the main street of Rue des Francs-Bourgeois,
this large mercerie has a wonderful selection:

but, if you can see the square sign on the door...
pas de photos! 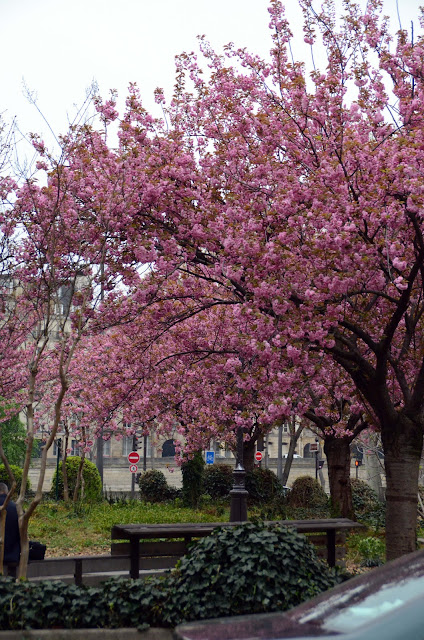 This small garden was founded in 1933 as Ave Maria Square
and has a well-appointed 790 m².
In May of 2007 Mayor Bertrand Delanoe renamed it
after the actress Marie Trintignant.

He must have seen these trees in bloom. 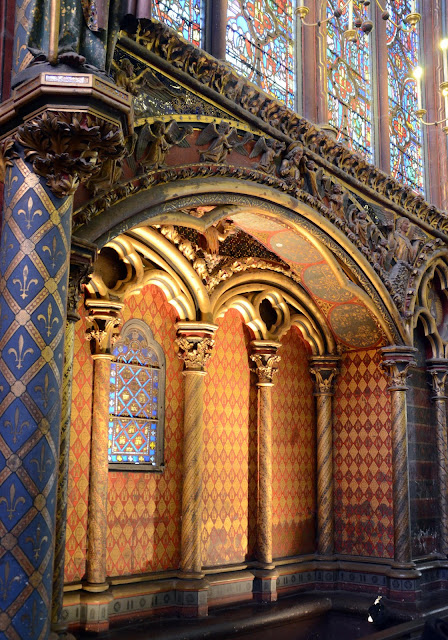 Certainly the magnificent jewel-toned stained glass windows are eye-catching,
but every inch of the wall surface and the vault is intricately colored and decorated.

Fragments of the original paint would indicate that the colors of the 19th century restoration pale by comparison.  The 13th century designers selected colors that were closer to the vivid hues of the stained glass windows. Is it...
the rippled reflections on the water?
the feathered friends who have come to see her?
some quiet thoughts deep in her heart? 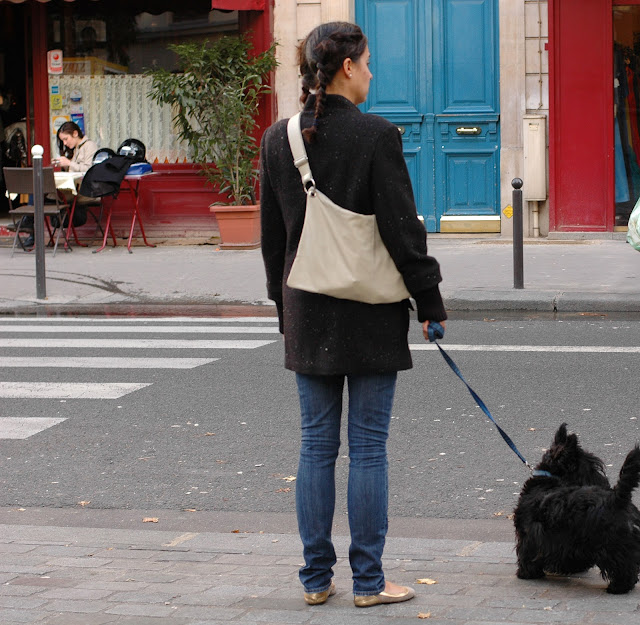 Madame with her ballet flats and her Scottie in tow
are either watching traffic or are lost in a reverie. 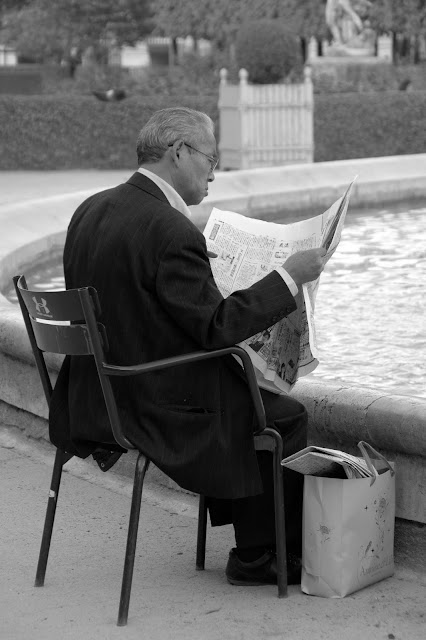 He is reading intently in the splendor of this garden.
The fountain must surely be splashing him a bit.

I would have my bare feet propped on the edge
(would have, have had, and will have) 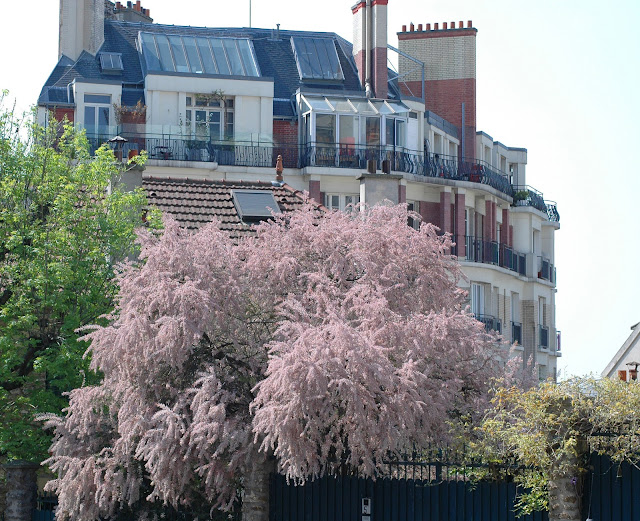 If you see this tree in the winter,
you would not even take a second glance.

In spring, it steals the show. 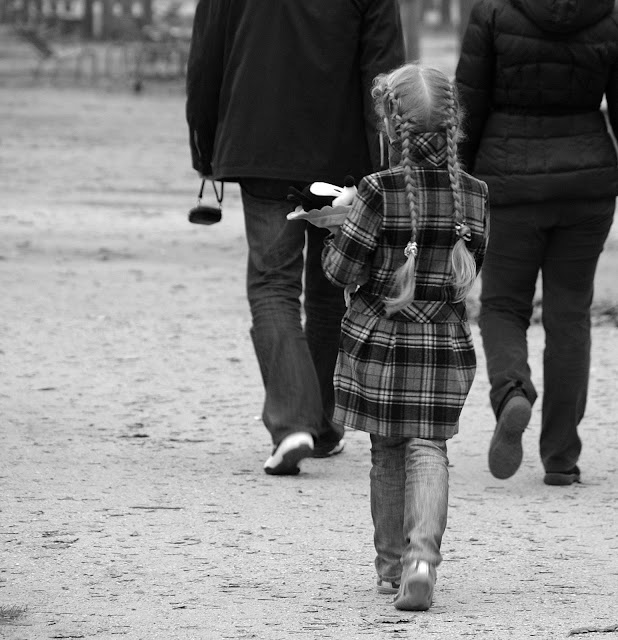 This little girl with her long braids has Mickey Mouse lovingly wrapped,
cradled in her arms.  Her chic plaid coat makes me think that...

She must be a French girl, n'est-ce pas? 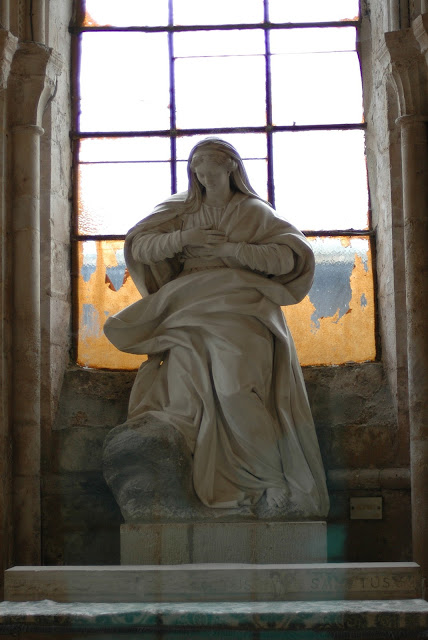 This church, established in 400 AD,
sits almost unnoticed in a ville known for its great cathedral.
A bit neglected, it is majestic in its own way,
filled with colors of turquoise, coral, and gold. 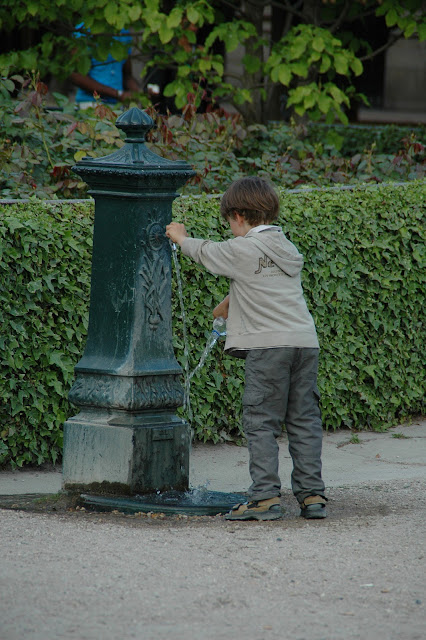 Water fountains are magnets for little boys.
It does not matter the nationality. Bookstores in Paris are full of treasures:

stacks and stacks of beautiful books, some to be read
and some just to be enjoyed.

This store is not much larger than you see right here,
filled to the ceiling. 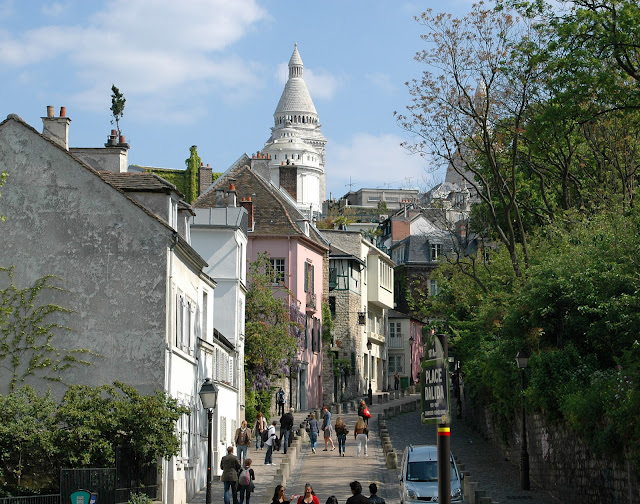 Dressed for spring in rose et vert,
Montmartre looks like a page from a fairy tale. 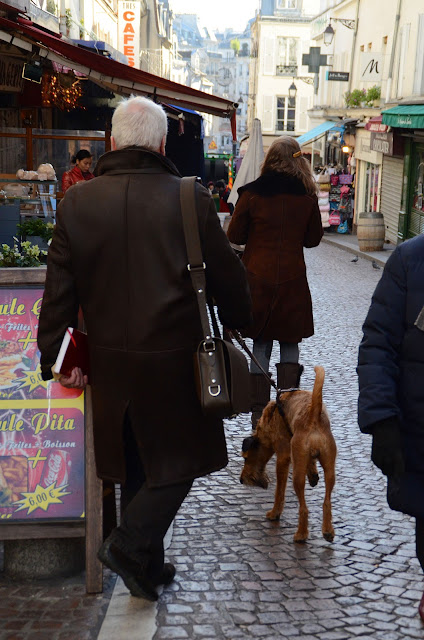 Walking the cobblestones of Rue Mouffetard,
this gentleman and his dog turned heads, accessorized and well-groomed. The grands magasins of Paris are known for their window displays.
In 2011 each of the Printemps windows featured fashion and an animal.