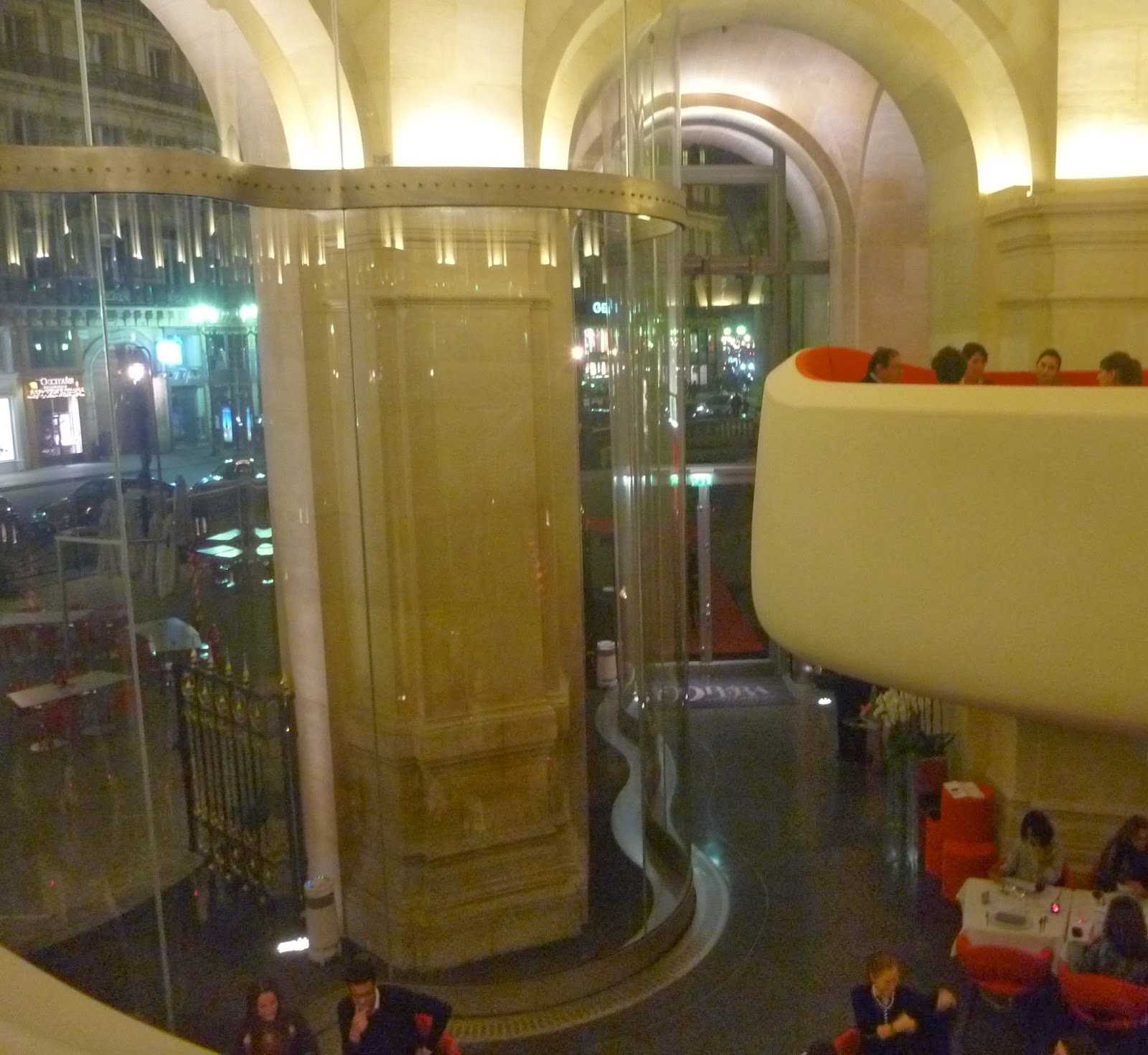 Can you imagine getting approval to build a restaurant as part of the storied Palais Garnier, only to discover that you could touch no walls, attach nothing to the 19th century structure?

Yet, here it is, and the artistry is magnificent as the curved transparent walls appear to float, moving in waves around Garnier's architecture on the northeast side.  It was conceived by the architect Odile Decq in the heart of the Palais Garnier. A mezzanine made of amazing shapes surrounds the original architecture of the Palais Garnier without ever touching it.  Opened in 2011, it is worthy of a special evening with Paris friends.  Oh, I would not wear red as you might disappear into the elegant seating.

L'Opéra Restaurant
Palais Garnier
1, place Jacques Rouchés
75009, Paris
Posted by Genie -- Paris and Beyond at 12:01 AM

I don't remember seeing this when we were there in 2012. I don't know how I missed it -- I suspect we would have loved it!

I can see that being more than a challenge. It is a beautiful space.

This was not yet there during our last visit. If I'm ever able to go again, perhaps we'll include a dinnere there one night.

Sometimes old and new architectures match very well, and magnify each other , like here. Very impressive!

Now that is certainly a very unusual fitout Genie. It must be like sitting in an enormous blossom. It's on the list. Bon Vivant J.

Surreal ... It does look like a floating glass bubble ... Must, must, must experience it! A la prochaine?

An ingenious marriage of two eras, with glassy reflections like the delicate skin of a bubble.
This is so eerily like the inspirations I had for my novel... I have to book a short break and visit it very soon!

I guess you would have to be pretty creative.

Hi Genie, wow, so impressive. I probably will never see it myself. I'm just stopping by to say how delightful your blog is. Thanks so much for sharing. I have recently found your blog and am now following you, and will visit often. I have been having trouble with GFC and if I am already following you, and you following me, please forgive me. If not, please stop by my blog and perhaps you would like to follow me also. Have a wonderful day. Hugs, Chris
http://chelencarter-retiredandlovingit.blogspot.ca/

Creative French design. They are masters of juxtaposing the old with the new.

Have a lovely weekend Genie

I've been to Palais Garnier several times, twice even last year, and I haven't managed to find this restaurant! Although they were doing renovations last year, perhaps it was obscured? I'll say that it was.