In the soft light of a classic Paris bistro,
I imagined seeing two ghosts (or three).


Perhaps it is just a reflection,
or my overactive imagination,
or....

As many times as I have been to Palais Royal
(spring, summer, fall, winter, rain, snow, rain)
I have never been to this restaurant, not even for a glass of wine.

(will be going soon!) 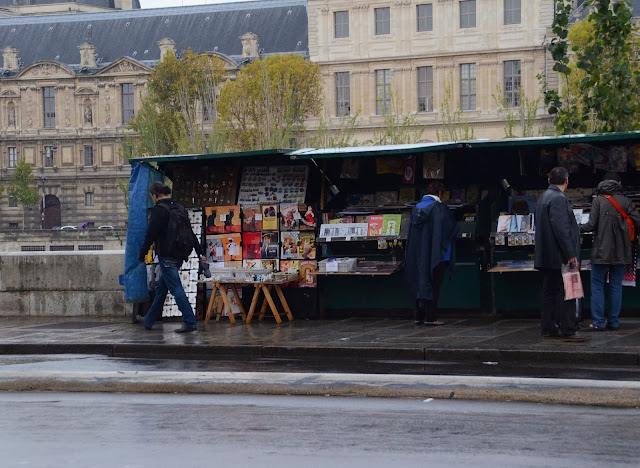 The bouquinistes were open on this rainy October day
selling to the tourists who braved the weather.

The very old books, journals, and cards are kept in the back of the stall,
protected from the rain.

Taken on a busy market day (Marché d;Aligre),
there is scant room for café table and chairs.
Still, the pastries and a coffee (or thé) can be enjoyed
as the market vendors shout out the quality of their wares.

One thinks that the price of the coffee and pastry is small
for this front row theatre seat.

The exterior of this 800-year-old cathedral
is well-known for its many statues over the massive doors.
The broader view reveals gargoyles and chimeras in various poses.

There are many bicycles on the streets of Paris and in the parks.
Even the smallest of children are riding bicycles.

However, I do not think that I have seen a bicycle for two.

Hope that you have time
for a ride this weekend

There are several play areas in Parc de Monceau
with plenty of room for running.

If you listen carefully,
you can almost hear the squeals of laughter and shrieks of the chase.

The fabrics are like candy to the eyes,
and the designs are stunning.

On each trip to Paris I stalk this department
and even chat with les vendeuses.
Sometimes I boldly take my photos
but love the "askew" appearance of the stealth photos.

I will be back soon for more...

This pâtisserie was filled with tarts
and the most unusual and colorful was this one of figs.
Combined with the violet blooms and a perfectly formed pastry,
this confection looks like a work of art.

Just a stone's throw from Église Saint-Paul-Saint-Louis in the Marais
is this sidewalk arrangement of plants and flowers.

The florist designer of this shop specializes in form and design
as simple arrangements allow the flowers to tell the story.

Just off rue de la Roquette behind a closed gate is a hidden artists' atelier,
filled with the sounds of wood planers and the scent of paint. 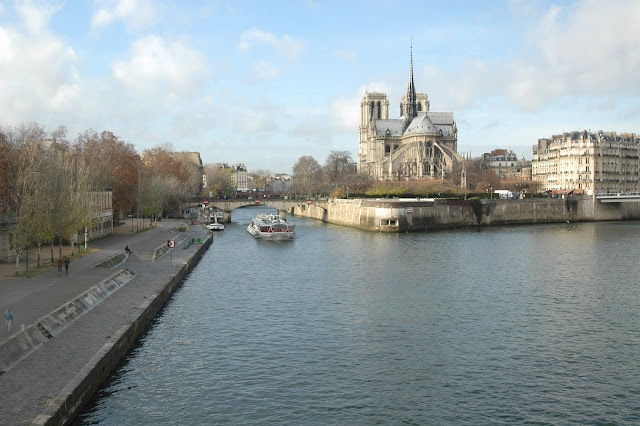 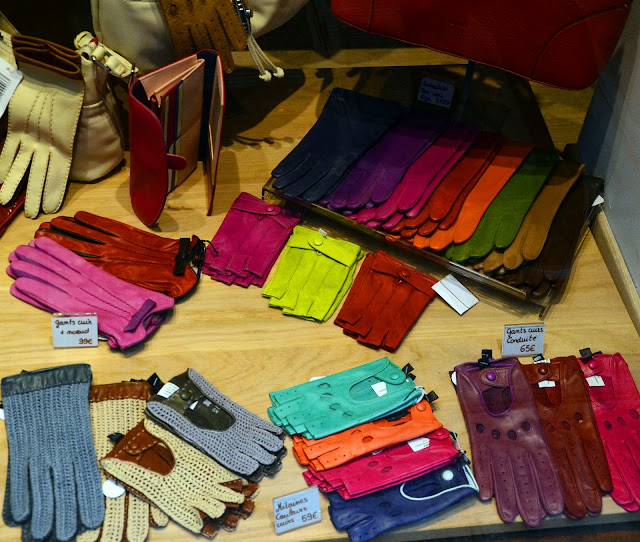 Rue St Honoré
Oh, yes, let's have a rainbow assortment of these
chic gloves!
bon weekend
Rue St Honore
75001, Paris﻿
Posted by Genie -- Paris and Beyond at 12:01 AM 11 comments 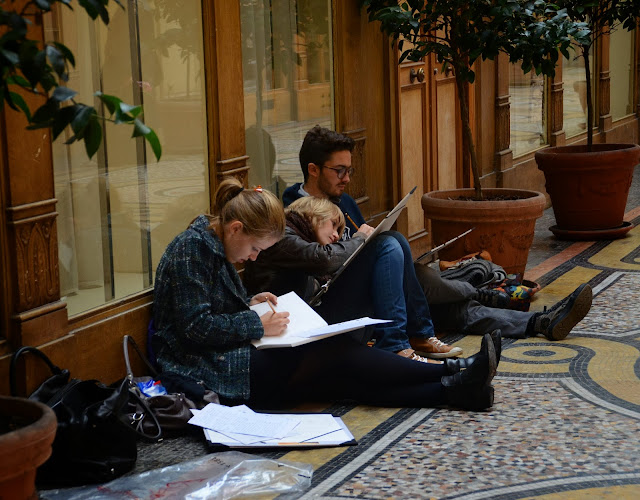 If you frequent the side halls in the famous covered passages of Paris,
you will likely see gatherings of students
sketching the century-old architecture.
The arches, the moldings, the skylights,
and even the floor tiles are worthy of a sketch.

Lunch with friends amid the art, style, and architecture of Paris at
Musée Jacquemart André

Oh, and do not forget
the Veuve Clicquot 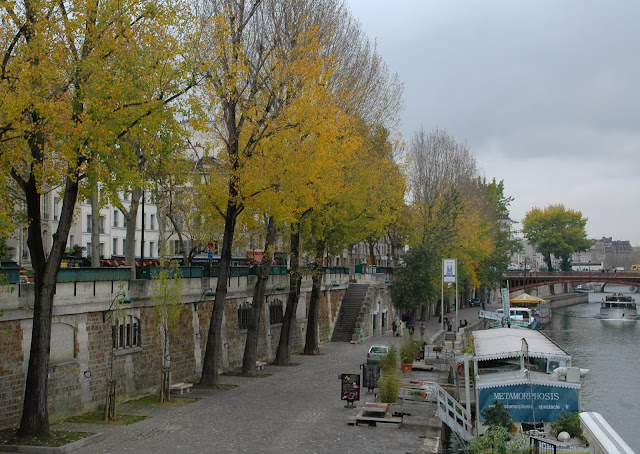 From Pont d'Archevêché one can monitor the activity along the Seine.

Take a walk below the street levels, alongside the boats of the Seine.
It is quiet with few tourists. 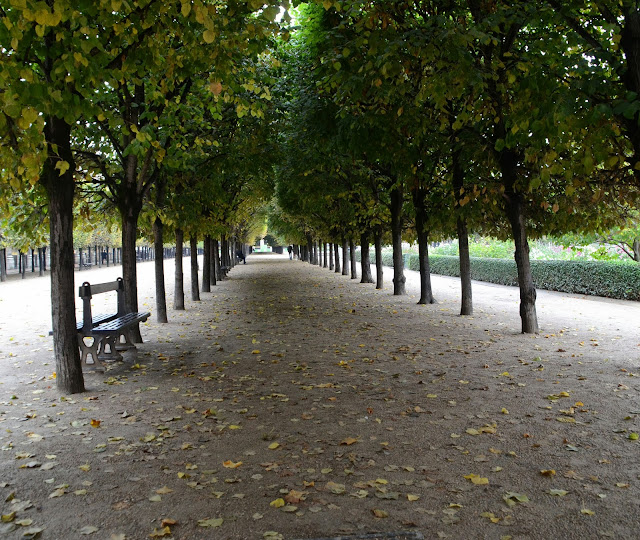 
This garden, like so many in Paris, has a different look for every season.

They all are special... 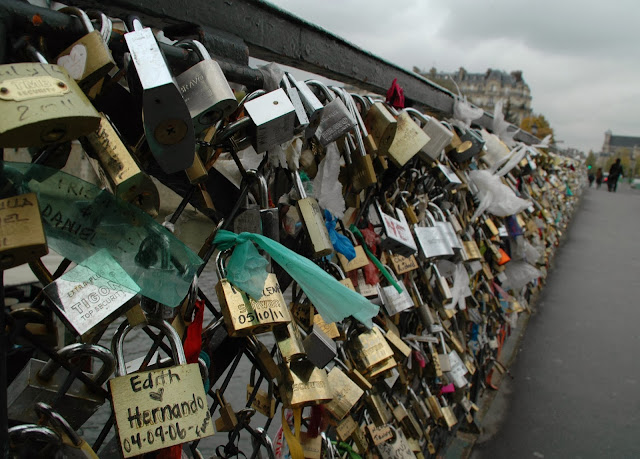 
Based on the hefty weight of
many locks in the foreground,
the larger ones have likely been removed or
"pruned"

One does hope that
Edith and Hernando are doing well... 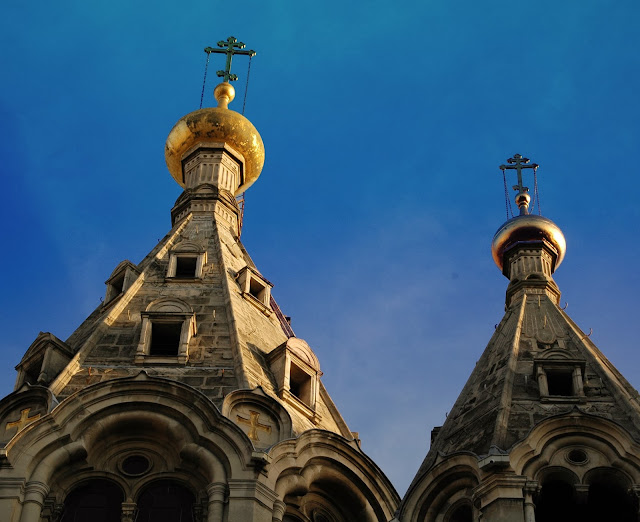 The bright skies of a clear autumn day
accentuate the gold domes of Cathédral Saint-Alexandre-Nevsky.
Although no photography was allowed inside,
the view of the low sun reflecting on the domes was sufficient.

To read more about this cathedral
and to see another view,
click here

This shop with its beautifully detailed vintage clothing
and fabrics is a delight.

Must be a French girl


perhaps not, but I think that she
...must be a French girl

I knew of this covered market, but had not visited Saint Quentin, one of the few remaining covered markets in Paris.  The fruits and vegetables are acceptable, but this market shines with its international flavor and food offerings.  The soaring ceilings have been protecting Paris shoppers for over a hundred years.

There are delicacies from Africa and Italy, spices from north Africa, and even Pasteis from Portugal.  There are a few vendors with region-specific foods from France and a beer boutique.

Cat on a ledge

I have passed by this address many times over the years
and have only recently looked up to see the wildcat
on the ledge above the window frame.

While exploring the neighborhoods near Gare de l'Est,
we happened upon this little hotel on a narrow street.
It appeared as a vignette of ages past.

Passage Saint-Roch
A light rain,
faint light of an autumn morning,
and the clicking of heels
as she made her way through the passage
Passage Saint-Roch
75001, Paris
﻿
Posted by Genie -- Paris and Beyond at 12:01 AM 12 comments 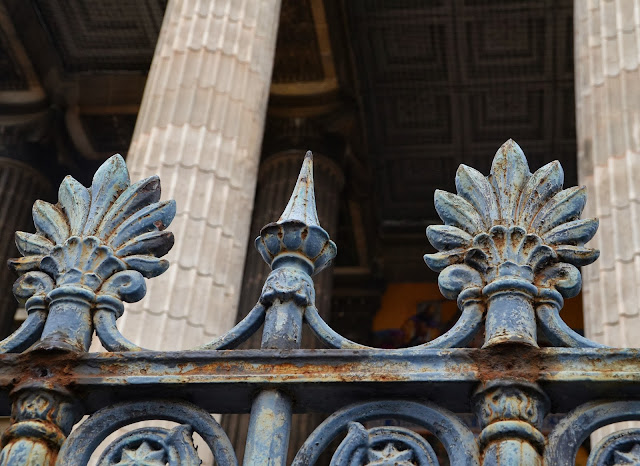 The wrought iron details are best seen close up 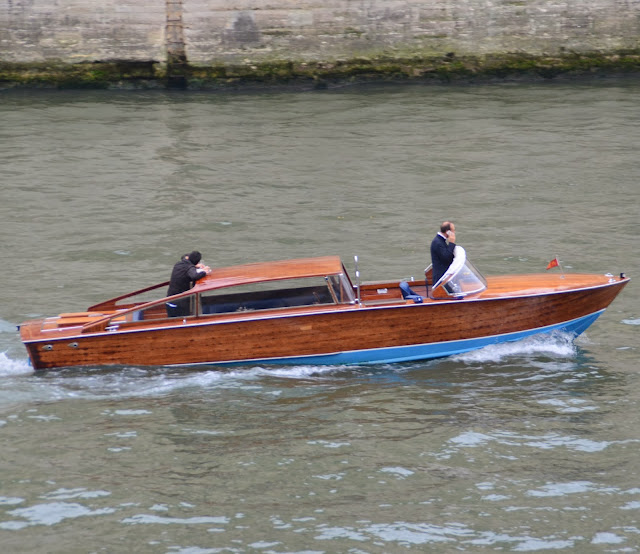 A boat and the Seine

We see here the captain at the bow of the boat
(driving while talking on the phone)
and perhaps two lovers at the stern.

Since this photo was taken from the quai,
there was not an opportunity to ask questions or to discover the story

This charming boutique in Galerie Vivienne
displays an exquisite collection of scarves and shawls
in silk, challis, wool, and cashmere.
This highly regarded, family-owned textile business dates back to 1875,
and is still managed by the Wolff family.

The colors and designs are delicious,
and I understand that all the fabrics are limited editions.


I think that if I could just pick one café in Paris for people-watching
it would be here at Café le Nemours.
No matter the weather
as you can move under the cover of the building in the rain
and there are heaters when it is cold.
The morning I took this photo, the chairs and tables were all empty...
save the patriot at the end of the row.


Yes, give me le Nemours any day,
a timeless classic café 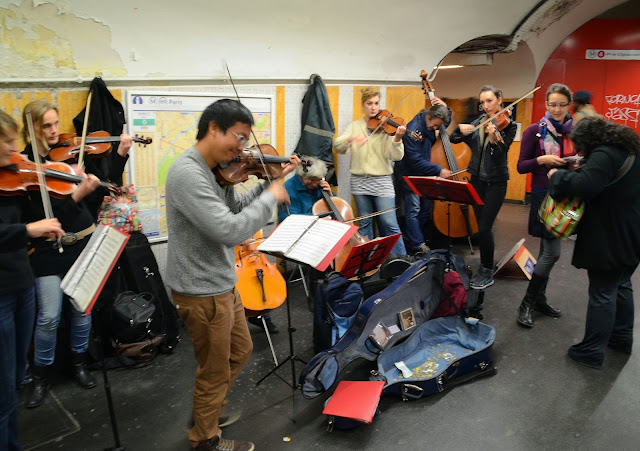 
Two days a week (Tuesdays and Thursdays)
you can hear the classic orchestral music of this group
of conservatory students, music professors, and musician friends.


The subterranean orchestra will stop you in your tracks
as the sound of Vivaldi's Four Seasons
echoes through the many tunnels of Chatelet.
They play at an intersection/crossing of lines 1 and 4.

Click here for a brief selection
of their Vivaldi's Hiver 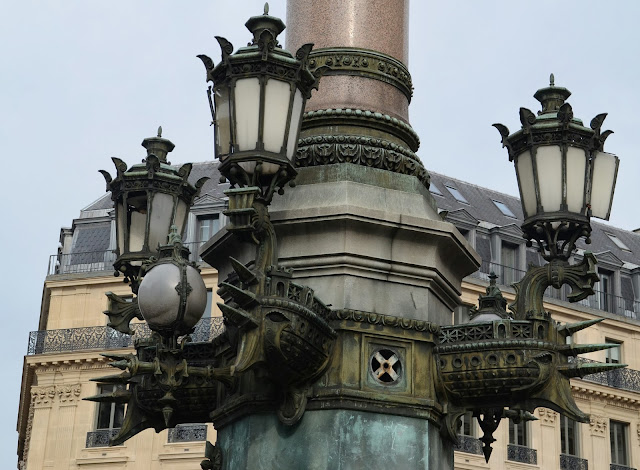 The rostral columns of Palais Garnier

The entrance to Pavillon du Chef de l'Etat (House of the Head of State),
which was turned into the Musée de Opéra on the western facade
of Opéra National de Paris Garnier,
is framed by two granite columns by Henri Alfred Jacquemart,
adorned with lamps and the masts of ships.
The bows of the four ships appear to have eyes.


Although other portions of this exquisite heritage site
have been restored since it was built in 1875,
the ceinture de lumière (belt of light) encircling the building has not.
Earlier this year an appeal was made to the public
to adopt one of the 22 lampadaires, 2 candélabres, 22 cariatides, and 14 columns.
The details of the rostral columns and the musical instrument-themed street lamps
on the opposite side of the opera house are stunning.


Click here to see the entries of other
City Daily Photo Blogs around the world.