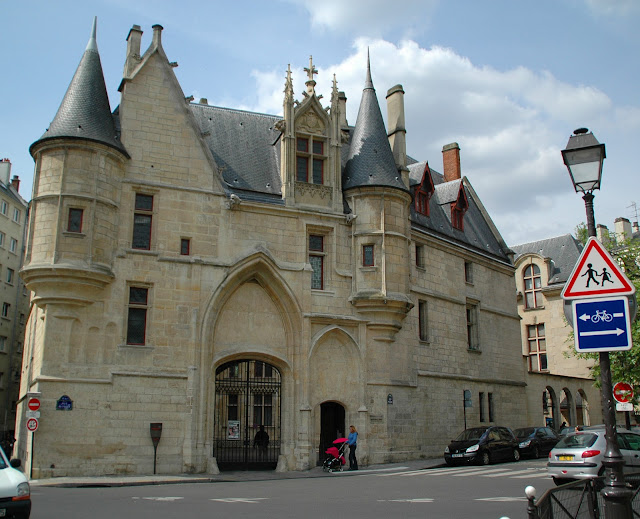 Built originally for the archbishops of Sens in the thirteenth century,
this hôtel was rebuilt completely
by Archbishop Tristan de Salazar between 1498 and 1518.

Although there have been many modifications
over the past five hundred years,
"it remains a rare survivor of late medieval-civil architecture,
an example of a semi-fortified manoir dressed up in the Flamboyant style."

Beautiful! And how wonderful it would be to stay there for a few days and really "feel" the history! Great post for the day, as always, Genie! Hope you have a lovely weekend!
Hugs
Sylvia

Be still my heart... This is absolutely breathtaking! What a thrill it would be to stay there, even if only for one day.
Thank you so much for sharing this Genie.. I really enjoyed
fondly,
Penny

Loved l'Hôtel de Sens! Too bad it's not a hotel that accepts guests.

Looks like a castle, so beautiful and I love your composition!
Léia

Wow! What a unique place this would be to stay on a holiday in Paris.

It is beautiful, I do love the old buildings they have so much more character than the new ones. I am glad that France has restored many of their buildings. Have a good weekend, Diane

A stunning, immaculate building and so beautifully preserved.
http://missbbobochic.blogspot.co.uk/

I would love to abide in one of those turrets. What a lovely photo!

Wow, what a beautiful structure! I love the architectural details!

This looks like another good fine -- and beautiful, too!

One of the things I love about Paris: this still stands. In NYC, it probably would have been torn down and replaced by some ugly thing built by Donald Trump.

Looks like it's been swept up from deep in the countryside and transplanted here. I half expect Rapunzel to let down her golden hair! A wonderful find, Genie. Bon weekend.

Sheer magnificence! And it's... A library. Sigh of admiration and love. :)

what a great find

Actually, thanks to Haussmann and Pompidou, plenty of Paris had "disappeared," so I'm even more glad that this hasn't.