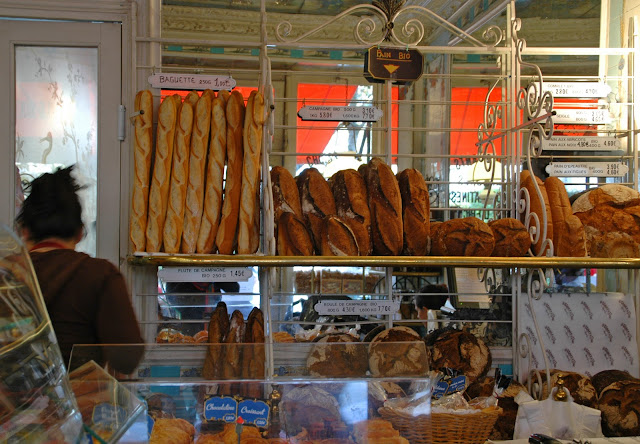 If you have been reading my blog for some time, you know how I enjoy "a hunt" and definitely love "a story."  Before my recent trip to Paris, blog friend Louis la Vache (San Francisco Bay Daily Photo) asked if I could get a photo of Le Moulin de la Vierge on rue Vercingétorix (14ième arr.)
I coaxed Peter (Peter's Paris) to make the trip with me, and we were delighted with the pain from the wood-fired oven, the tile walls, the murals of women holding armfuls of wheat, the mural on the ceiling, the etched glass doors...
This is the story behind this charming boulangerie as told by Louis:
The boulangerie is operated by Basil Kamir, a former music promoter turned boulanger. He inadvertently became one of the leaders of the renaissance of artisan baking in Paris specifically and France in general.
Kamir was using the then-closed boulangerie as his office when an "urban renewal" project in the neighborhood deemed that the building would be destroyed. Basil loved the building with its marble counter, copper fixtures, and fine details.  He couldn't allow the building to be destroyed.
Because of his work in the music business, he knew the Minister of Culture. A call was placed to the Minister, Basil pleading for intervention to save the boulangerie building. Calls were made, arms were twisted.
The Minister of Culture phoned Basil and said (in effect), "I've got good news and bad news. The good news is the building will be saved. The bad news is that it must be used again as a boulangerie."
Basil protested, "I don't know how to bake!"
To which the Minister replied, "Well, you had better learn!"
And he did. And in doing so, became a leader in the rediscovery of artisan baking, away from pain industriel, and also became one of the leaders in introducing biologique (organic) flours into baking.
But it didn't happen without some delicious Gallic drama.
A wrecking crew complete with a crane fitted with a wrecking ball showed up in front of the boulangerie. Somehow, the word didn't filter down through the bureaucracy that the building was not to be destroyed.
Basil practically came to blows with the crew. He went back into the boulangerie, and came out with a shotgun. The crew wouldn't back down, and neither would Basil. After some time of this impasse, Basil, took his shotgun and went to the basement, crawled into the wood-fired oven (at this point still long unused) with his shotgun and told the wrecking crew they would have to take him out!
Panicked calls were made and finally the wrecking crew got the Official Bureaucratic Word not to destroy the building.  (You can get additional detail from Louis' post here - Merci beaucoup, Louis)

Here is the link to Peter's comprehensive post of the boulangerie.
Le Moulin de la Vierge

What a nice story. I have to go there some day too!

The boulangerie with nine lives.

The story behind the place makes it even more precious and interesting!A great thank you to Basil!

How funny must be Boulangerie Tuesday! I have posted on them also great story Genie
Carla x

this is Belgium said...

A great story and a reason to visit this boulangerie to taste the bread. Thanks for showing and telling.

Great story. I must try this place.

That is quite a story, the bread must be delicious when it is made with so much love.

The bread looks delicious and the story behind this boulangerie is really fascinating. I will put this bakery on my "to do" list.

what a story! do you suppose an equally fascinating story stands behind every little shop and restaurant we pass on the street?

What a lovely story. Wouldn't it be wonderful to go there on a daily basis for your baguette.
Sam

Love the colours of those pieces of bread. One of the attractive things of Paris.

Fabulous story genie! So sorry I missed this on my last trip.

This is such a lovely story, SAVE all of Paris I say...wish I was on that boat gliding down the river.
Thanks
yvonne

Well you and Carla have us covered in the bread category today! I'd love to see that old stove and smell that wonderful aroma when you walk in the door of a boulangerie. Now back to my English muffin.......grrrr.
V

Those crusty baguettes look divine Genie, what a fantastic story I can just picture the scene with Basil and the wrecking crew, what a confrontation that must have been.

Cool story Genie. I mentioned Basil Kamir when I blogged about la Baguette for my French icons series, but I did not know the whole story! - Veronique (French Girl in Seattle)

Thanks Genie and Thanks Louis!
This is a very special post!
Hugs
Léia

Thanks to you both for such a wonderful post! I do love baguettes and I would love to be able to enjoy one there! Thanks to you and "Louis" both for a great post for the day! Hope you have a great week, Genie!

Wonderful story. I have just returned home and have a million things to do. I was just going to "glance" at my list of blogs...Yours was more than a glance. But! I loved it!!!Janey

I hope a nice movie will be made. The script sounds perfect to me and I am sure it won't be difficult to find someone to write the film score.

According to my cookbook,a young man named Jean-Luc Poujaran was the first one to make the organic baguette some years ago.

M. Kamir was the owner of a little record shop.

Your photo of the boulangerie is absolutely beautiful!

Cute story. I wonder how much is true?

It's a good job I've just finished my evening meal Genie, otherwise this shot would have had me drooling!

Thanks for the visit.

Looks like we have more than a love of Paris in common.

Lived in Marshall too a long time ago!...Janey

I hope that Basil's boulangerie is the most successful one in Paris—he certainly deserves it after what he went through to make it happen! That's a great story, and a very inviting photo, Genie.

Love the story and can't wait to get there myself one day. Picked up two fresh baguettes on the way home, not quite the same but still really good.

Great photo, great story. Thanks for all the info.

Thank you all who read through the story, and special thanks to Louis la Vache who sent me on the journey, and to Peter who shared the adventure. It is not often that one can show Peter something he has not already seen in Paris. Peter will be posting on this boulangerie and he will have the full set of photos and a map. I will remind you all with a link to his post.

Thanks for the information ad for the interesting story, Genie, I will be in Paris next week and I´will be "dans le quartier", so I will surely go to see this beautifull boulangerie!
Have a nice day
Hana

Love your lLove your little snippets that accompany your gorgeous images,
Bisous

«Louis» heartily thanks Genie and Peter for making the trek out to the 14 ème to track this boulangerie down. When «Louis» lived in Paris, he neglected to take photos of Moulin de la Vierge, "The Virgin's Mill".

«Louis» has met Basil Kamir and has actually pulled bread from that wood-fired oven in the basement.

The street on which the bakery is located is named after the 5th century gallic hero, Vercingétorix who very nearly defeated Julius Caesar. The French cartoon character "Asterix" is very loosely based on Vercingétorix.

Great story, Nadege is right what a film it would make. Diane

Catching up on all your gorgeous posts today. This one was my favorite!

Dear Genie, I was in the bakery and I liked it very much. I ate their palmier and tarte au citron and it was fabulous. I spoke also with the "boulangère" (another one than you show on your photo) and we were very suprised that the world is really very small. She is Roumanian and imagine that her daughter lives in Czech republic and works in IBM Delivery Centre in my native town of Brno - together with my nephew!
I will publish my photos of the bakery tomorrow on my blog.
Have a nice weekend
Hana